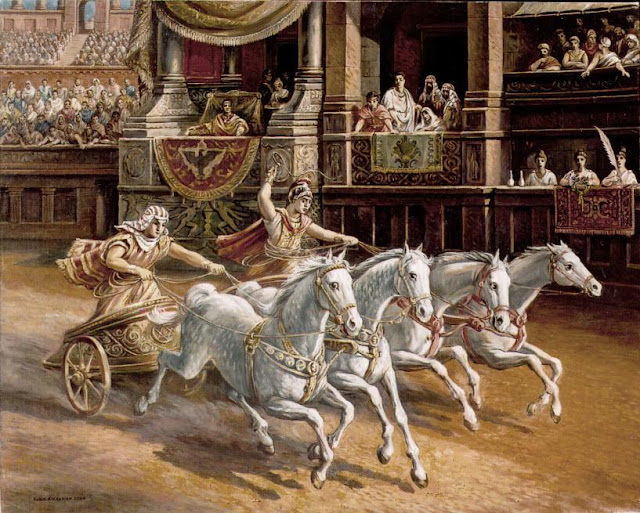 The action or art of driving a chariot or coach.

The next time you hear someone quote the "fact" that Tiger Woods was the first sportsman to earn over $1 billion, set your face to smug and your tone to derisory as you chime: "Umm .. I think you're forgetting about Gaius Appuleius Diocles, who just so happened to have pipped Tiger to that post by nearly 2000 years!"

Diocles skills of aurigation were such that, during his 24-year career as a Roman chariot racer, he earned the equivalent of $15 billion. He retired at the age of 42, which was a feat in itself as chariot racing was a decidedly deadly business. It had been an Olympic sport in the time of the Greeks, one of the few events where the athletes did not compete naked (for obvious reasons). The Romans never liked to miss an opportunity to make a dangerous sport even more dangerous, however, and rather than have the charioteer hold the reins like big Greek girls, they preferred to wrap the reins around themselves so that, in the event of a crash, at least the charioteer could continue to be dragged around the course, albeit without a chariot and albeit dead on completing the race. Spectators played their part too, and it was not unknown for fans to lob lumps of nail-studded lead at chariots of opposing teams. Altogether, it was a fun day out for the family, especially as admission was free to the poor.

Without a doubt, Diocles puts Tiger in the shade. Not only does competitive aurigation make professional golf look like ... well ... golf, but Diocles' earnings make Tiger's look like beer money, and it's unlikely that he would have crashed his chariot into a tree while fleeing from his embittered wife. Go Tiger.