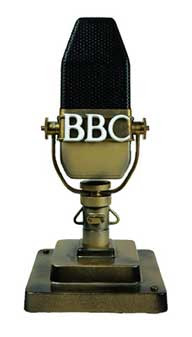 The BBC (sometimes called The Beeb) is one of Britain's cultural icons, on a par with red telephone boxes, the royal family and fish and chips. As a public service broadcaster, it operates without advertising and has a remit to be wholly impartial in all its reporting. Its reputation for this was forged in World War 2 when, transmitting in some 45 languages, its radio broadcasts were listened to around the world. Although its reports were no doubt slanted to maintain British and Allied morale, it was secretly listened to in occupied and enemy territories by civilians (and soldiers) who saw it as the only source of reliable and accurate news. The BBC still plays a significant role in modern British consciousness both for its reporting and its high-quality entertainment shows (such as Top Gear, Sherlock, Dr Who and Strictly Come Dancing). Despite having been subject to a number of scandals in recent years, its weighty broadcasting presence, revered position of trust and catalogue of internationally popular programming seem set to ensure that the Beeb will be with us for many years yet ...


... as will BBC English, also known as the Queen's English, Oxford English, Standard English and Received Pronunciation. In decades past, all BBC announcers were required to speak with this type of English which today can sound rather posh and affected. To reflect the cultural (and linguistic) diversity in Britain, however, it's now common to hear BBC announcers speak with regional accents that reflect the area to which they're broadcasting. Despite this, it's still the English that is generally taught in schools and language courses, and an accent that is widely seen as (if there is such a thing) the proper English.

Do you have any thoughts on the BBC?

Do you consider BBC English dashingly dapper or priggishly posh?

Please leave any comments below.
Posted by Eddie F at 10:00