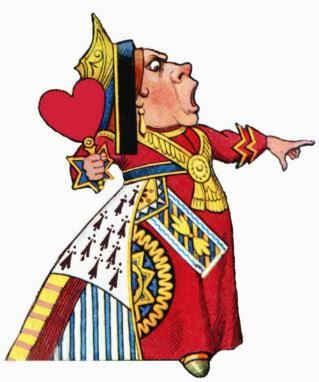 Cut off the head or top part of; kill in this way.


Behead caught my eye as an interesting word firstly for the fact that it's not simply a modern compound of be and head but there is actually an Old English behead being, as the dictionary says, beheafdian. It's also a common concept in any child's vocabulary thanks to the phrase 'Off with his head!', the supposed refrain of any slighted king or queen (if you're a child playing the part of a monarch in a game, you really haven't done the role justice if you haven't had at least one person beheaded by the end of it). It did make me curious as to the origin of "Off with his head!" A little bit of research indicates (somewhat disappointingly) that it's Shakespearean.

Off with his head, and set it on York gates;
So York may overlook the town of York
Queen Margaret, Act I, Scene IV, Henry VI , Part III

While Queen Margaret's line might be the first recorded use of the phrase, another queen, the rather unhinged Queen of Hearts from Lewis Carrol's Alice in Wonderland, must be credited as its most ardent sponsor. As well as her penchant for playing croquet with live hedgehogs, this hot-tempered regent likes nothing more than shouting "Off with their heads!" against any she feels have slighted her. Fortunately, the King of Hearts was usually on hand to ensure that very few of her declared beheadings actually came to pass.
Posted by Eddie F at 15:30