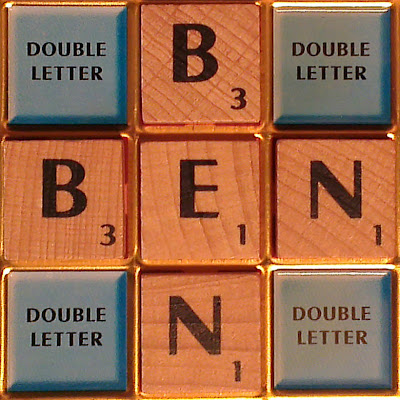 Ben is an exceptionally useful word in the arsenal of any Scrabble player, not only in a practical sense, but also as a potent weapon in the inevitable psychological warfare that is fought across that lettered board. Invariably upon its placement, your opponent will smugly point out that Ben is a name and proper nouns are not allowed in Scrabble (usually expressed with an undertone of what-a-moron).

The trap set, you can now retaliate with supreme superciliousness: "Actually, ben isn't a proper noun but is defined in the OED as a Scottish or Irish mountain peak. Therefore, it need not be capitalised and is perfectly valid according to the rules of Scrabble."

Then, with your opponent cornered and seething incredulity, you can move in for the coup de grâce by sarcasm: "What? Didn't you know that? Did you think Ben Nevis was someone's name? Like the person that discovered it or something?"

At this point, you need only tut softly and roll your eyes at their naivety. Ben might not have won the game on points, but a great psychological blow has been struck, one from which your beleaguered foe is unlikely to recover.
Posted by Eddie F at 11:00