The fact or power of being in two places simultaneously.

I've done it. After years of serious and painstaking deliberation, I've decided on the superpower I want. It's not flight (too old), it's not super-strength (too vain) and it's not invisibility (too tempting). What I want is the power of bilocation, the ability to be in two places simultaneously. Once I've acquired this power, I will henceforth be known as Bilocation Boy, and my catchphrase will be "He's behind you." How cool would that be? Come on, admit it: you're impressed and just a teensy bit jealous because you didn't think of it first.

I didn't invent bilocation, of course: Catholic saints have been claiming that little trick for years. Apparently even Vladimir Lenin gave it a go, having been seen doing a spot of paperwork in his office while critically ill in bed. However, I could be the first to apply it to superheroism. Its applications would be enormous, even without the benefit of complementary superpowers (and if I know anything about superpowers, and I don't, they don't usually come in ones).

So, apart from the mundane advantage of being able to better manage the tricky work/life balance of a superhero (running the kids to school while diffusing a bomb elsewhere), it would also be a fantastic advantage in fights, allowing me to battle two enemies at once (in different places too), and also allowing me to bilocate behind the archvillain (hence my catchphrase). Lastly, it would prevent supervillains from catching me out with the old superhero dilemma: "Do I save the girl from the burning building, or do I diffuse the bomb and save the city?" Easy - I can do both and be home in time for Downton Abbey. The only downside to my powers of bilocation is that I would be easier to frame for some heinous crime (and villains like doing that), as I would have to provide the police with two alibis, which would be impossible if I wasn't bilocating at the time of the crime.


Just on the off-chance that you're still reading and your attention hasn't bilocated off somewhere else, here is a sneak peak at the script for the upcoming Bilocation Boy movie I'm writing (I'm probably never going to get the power in real-life, am I?):

Bilocation Boy (BB) is strapped to a table, a circular saw whirring between his feet, ready to slice him asunder. Enter Villainetta, Bilocation Boy's beautiful yet deadly archenemy and love interest. She approaches a console and puts her hand on the lever, ready to shift the saw along the table to kill Bilocation Boy.

Villainetta:
I see you finally know your place, Bilocation Boy! Or should I say ... DIE-location Boy? Mwahahaha!

Bilocation Boy:
Ha! Did you not know that DI- is also a Greek prefix meaning two? So Dilocation Boy means pretty much the same thing as Bilocation Boy. Which reminds me: he's behind you!

As Villainetta turns around, the bilocated BB knocks her out with a single punch. He then releases himself from the table, and 'monolocates' over her, looking down at her disdainfully before suavely delivering his killer punchline.

Bilocation Boy:
Sorry I couldn't stay, Villainetta; seems like I was behind on a few things.
Now, your place or mine. Or ... both?

Please note: if Lexicolatry suddenly goes quiet, it's probably because I'm busy making the film with JJ Abrams - I don't expect a hot script like this to hang around long before someone snaps it up. If you've ever bilocated, have the power of bilocation, or would like to invest in the Bilocation Boy movie, do please leave your comments below. 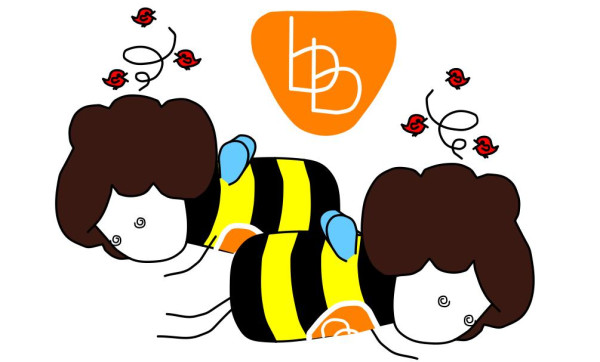 I knew it was a hot script! Thanks to the inventiveness of Bibi from Bibi Blog, Bilocation Boy now has a sidekick, the pithily named Bilocation Bumblebee Bibi. Sadly, due to her penchant for monologuing, Bibi expects Bumblebee Bibi to come a cropper rather quickly (see the comments below). Still, four heads are better than two, and perhaps Bumblebee Bibi could also employ some of her bee-like powers in the fight against evil. Thank you, Bibi, for a very cool picture indeed! If you haven't seen Bibi's drawings before, do buzz over to her blog and have a gander.
Posted by Eddie F at 10:00