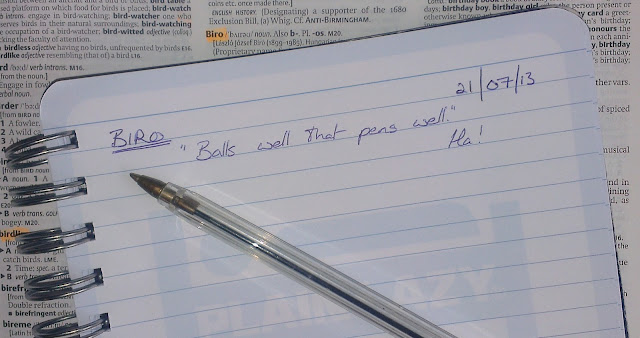 (Proprietary name for) a ball-point pen.

I should probably start with an apology to Mr Biró himself, for I think it unlikely that his biro was ever used to pen a more terrible pun. And I had other options: one fine young lady suggested "Doing it Write Since 1935". But alas! No sooner had I sat at my desk to research this post than I found I had scrawled those words across my notepad: "Balls Well That Pens Well". My apologies, Mr Biró.

Although perhaps not. Looking closely, I'm not really sure that it is a Biro; it's just an anonymous, cheap ballpoint pen. That's the point, though, isn't it? Biros are so ubiquitous that we don't give them a passing thought as we hunt for them, chew them, dismantle them, suck them and occasionally write with them. And if someone lends us one, it's even questionable whether it's worth the bother of returning it. I mean, is it? Really? Worth standing up and crossing a hotel foyer to return a biro to the receptionist who'll probably just give you a quizzical oh-you're-actually-giving-that-back sort of look? This is one of the 20th century's greatest ethical conundrums.

While it might seem so inconsequential, the humble biro is one of Hungary's greatest inventions (and Hungary has quite a few, believe you me). Biró wasn't the first person to come up with (or even patent) the idea of a rolling-ball system for pens, but he was the first to make it commercially viable. With his brother György, a chemist, he perfected the troublesome ink viscosity and the ball housing unit, and the ballpoint pen was born in 1935 (patented in Britain in 1938). Since then, a biro has become a generic term for any (cheap) ballpoint pen, whether it happened to an actual Biro or not (the Biro trademark is now owned by Bic).

And that's it: the humble yet thoroughly groundbreaking biro was born. It was quickly adopted by the RAF (whose pilots were rather tired of their fountain pens exploding mid-flight), became a favourite drawing tool for artists, and there's probably not a second of any day in which someone, somewhere, isn't asking: "Do you have a biro?" (and then wondering if they can be bothered to give it back).

Do you use biros?

Is "stealing" a biro really stealing?

Can you think of a better (or worse) pun?

Do please leave your comments below.