Bivouac - A Night Beneath the Stars 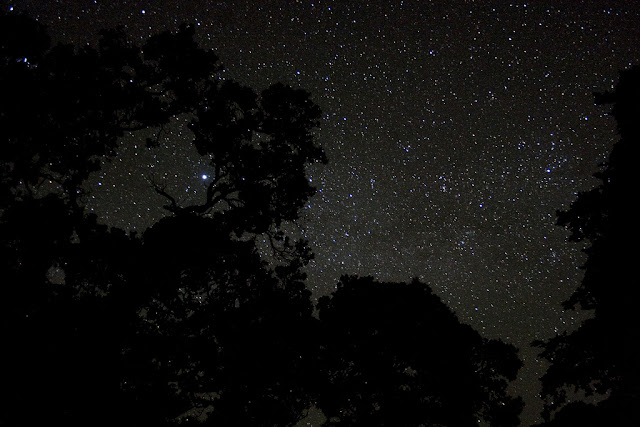 Noun & verb. Early 18th century.
[French, probably from Swiss German Bîwacht literally 'extra watch', said to have been used in
Aargau and Zürich to denote a patrol of citizens to assist the ordinary town watch.]

A. noun. Originally, a night-watch by a whole army.
Later, a temporary encampment, usually for the night, without tents;
the place of such an encampment. E18

B. verb intrans. & trans. in passive. Inflected -ick-. Remain in the open air (especially during the night) without tents etc. E19

A. noun. A shelter; a small tent. E20
bivvy bag, bivvy sac(k) a person sized waterproof bag in which one may sleep when out of door.

B. verb intrans. Spend the night in the open air without a tent, especially in a bivvy bag;
encamp with little or no shelter. M20

There are few greater pleasures in life than packing up your sleeping bag, escaping the city, and sleeping under the stars on a warm summer night. I used to do it frequently when I was young, packing up some food and drink and heading off to Dry Sandford Pit, a nature reserve in Oxfordshire that my father used to take me to as a child to search for insects and fossils. There, the night sky was released from the sickly yellow glow of streetlights, and the ever present hiss of distant traffic was replaced by the chirping of insects and the rustling of leaves in the breeze. Lying on my back, looking up at the expansive sea of innumerable stars, I felt as if I was looking down, looking down into the depths of the universe and then, just for a moment, my stomach would turn as if I were about to fall into it. It was a profoundly moving and humbling experience - the feeling of falling into and being part of the stars and universe, the feeling of experiencing just a little of the awe-inspiring vastness of space.


If you have any thoughts or feeling on bivouacking, do please leave your comments below.
Posted by Eddie F at 10:00