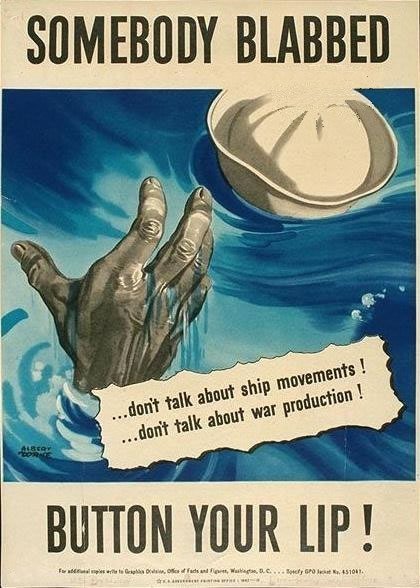 1. A person who gossips or chatters; a babbler; a tell-tale. ME

While it's not quite in the same league as giving away Allied ship movements during WWII, it's still supremely annoying when someone blabs the football scores to me before I've had a chance to watch the Match of the Day highlights on a Saturday night. On such Saturdays, I've even taken to completely avoiding Facebook and not answering my mobile phone, so wary am I of encountering some blabbermouth intent on ruining my one sporting pleasure. And it's not just sports, of course - anyone who's been captivated by a TV series knows what it's like to be a day behind the rest of the world, desperately trying to get through the day with your hands metaphorically clapped over your ears so as not to catch even the faintest whisper of a spoiler. Blabbing blabbermouths are everywhere, and in the age of social media it's virtually impossible to avoid them.

Jennie Lamere might be able to help - she recently designed an app that will block all blabber-mouthed, plot-revealing, night-in-ruining tweets and statuses from reach you via social media. How brilliant is that? I'm thinking of writing to Ms Lamere and suggesting an extension of the app into real life interactions. Imagine talking to someone, and the moment they start to blab what happened on Downton Abbey last night, your phone emits a piercing, 200dB screech, rendering all further communication impossible and you both writhing on the floor in agony. It could even have different settings for different people and key phrases:


"Oh, my baby did the funniest thing yesterday ... " SCREECH!

"I had an interesting dream last night ..." SCREECH!

Hey, this isn't a bad idea. I could be rich. Right, keep quiet everyone - I'm off to learn IT technology and how to tell computers to ... umm ... do stuff.