Blitz - The Bombing of Britain 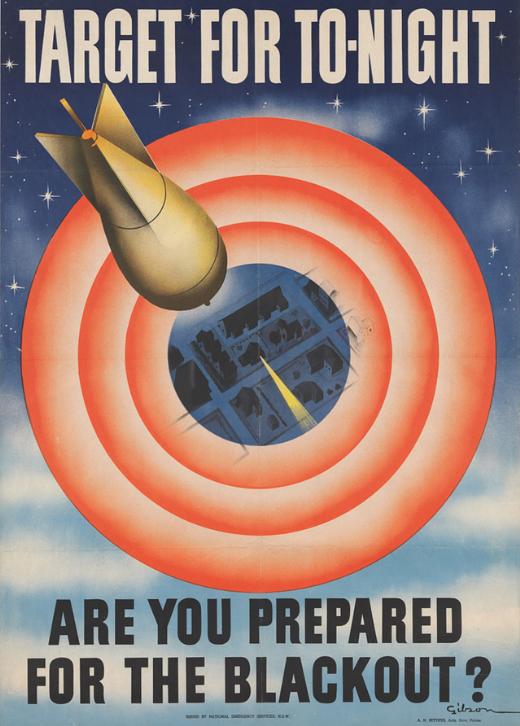 A1 noun. A sudden or intensive (especially aerial) attack with the object of immediate
destruction or reduction of defences; specifically the air raids on London in 1940. M20

A2(b) noun. American Football. A charge by one or more defensive backs
into the offensive backfield to anticipate a pass. M20

B2 verb trans. Attack, damage, or destroy by a blitz. M20

B3 verb intrans. Charge into the offensive backfield. M20
"Right. Today I'm going to blitz my office." Granted, I don't think that's something I've ever actually said, but blitz sits quite comfortably in my active vocabulary to mean any bout of intense activity or work, especially if it's an unpleasant task that one wants to get out of the way - tidying my office would definitely fall into that category.

Used in that way, blitz is unusual in that its origin stems from The Blitz, the campaign of sustained aerial bombing carried out by Germany against the United Kingdom during World War 2. Although London is the city most associated with the blitz, numerous other cities were targeted, including Liverpool, Birmingham, Glasgow, Plymouth, Bristol, Coventry, Portsmouth, Southampton, Hull, Manchester and Belfast. The campaign lasted from September 1940 until May 1941 and initially only targeted military and strategic objectives. However, on the 24th August 1940, a number of German bombers drifted off-course and accidentally bombed a residential area in London. Churchill ordered a retaliatory strike on Berlin, and from that point civilian centres were targeted by both sides.
In Britain, the blitz is remembered with a certain pride and nostalgia, evoking feelings of national solidarity and "the blitz spirit" as people of all classes came together in the face of a common and terrifying enemy. As a military operation for Germany, it was a total failure, neither facilitating Hitler's planned invasion, breaking the will of the British people or crippling the UK's war economy. Indeed, the precursor to the blitz, The Battle of Britain, in which Germany attempted to gain air supremacy over the UK, was Germany's first major defeat of the war. Thus, the campaign and period as a whole is a source of great pride for veterans and the British people generally.

Despite this nostalgia, the details of the blitz are unflinchingly grim. By the end of the campaign, over 43,000 civilians had been killed nationwide and another 139,000 had been injured. Enormous damage had also been done to both the country's infrastructure and housing stock, causing significant hardship even for civilians that weren't directly affected by the bombing. Considering the word's rather dark history, a history that's still within living memory, it seems surprising that it's entered such common and even flippant use.


Were you present during the blitz?

Are there any words describing a similar period of hardship or turmoil in your language that now means something more mundane?

Do please leave any comments below.
Posted by Eddie F at 12:00