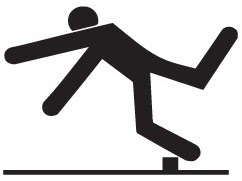 There are many words for a mistake in English. In 'B' alone, Lexicolatry has explored the beautifully cosmopolitan bêtise and bévue, and the dashingly posh bish as words to describe a bit of a boo-boo. These are charming words; classy, refined and urbane. There are times, however, when it's not just a bit of a bish, old chap, and your bévue has been so embarrassing, so cack-handedly oafish, that only a word like blunder will suffice. And that's the beauty of blunder: related to blind and most likely having its origin in the Norwegian blunde meaning "shut the eyes", it evokes the imagery of someone stumbling around blindly, knocking over tables and pulling down curtains, falling from grace and taking everything within arm's-sweep with him. Blunder: it's a mistake of the clumsiest, stupidest and most ridiculous sort. And in this technological age, we can be sure that there is a camera somewhere to preserve the memory.

Have you made any blunders recently?

Are you prone to blunders?

Are you, in fact, a blundering idiot?

Do please leave your most ridiculous comments below.
Posted by Eddie F at 08:00