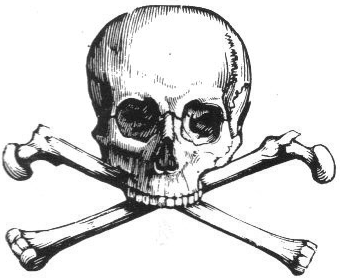 1(a) Any of the pieces of hard tissue that make up the skeleton of a vertebrate animal,
and consist largely of calcium phosphate or carbonate in a matrix of collagen fibres. OE

1(b) (Part of) a bone to which some meat adheres, providing possible sustenance. LME

1(c) specifically A bone used by Australian Aborigines in spells to cause death or sickness. L19

2 In plural. The skeleton; the body; the mortal remains; figurative the essential framework of anything. OE

3 The bony structure of the body; the body's hard, solid, or essential part. OE

4 The material or tissue of the bones; any similar animal substance, as ivory, dentine, etc. OE

5(a) An article originally or usually made from bone or ivory, especially a domino, (in plural) dice, castanets. LME

5(b) specifically A strip of whalebone or other stiffening material in a corset etc. L16


I've never seen any of the bone in my body, and quite frankly I hope it stays that way. I've seen other people's bones, protruding through their skin through open fractures or exposed by deep lacerations, but thus far mine have remained safely tucked away inside me, pristine and intact, and that's exactly how I like it. Despite our bones (generally) being so anonymous, it's definitely not a case of 'out of sight, out of mind', as they figure in numerous English expressions. For example, a lazy person might be described as bone idle, which is the absolute zenith of laziness as bones don't do anything, right? Well, no, that's not accurate at all, and I'll have a bone to pick with anyone that says otherwise and I make no bones about it.

Having "a bone to pick with someone" is an old idiom that probably relates to a dog chewing on a bone, picking it clean of every last morsel of flesh, analogous to someone who wants to pick over every last detail of whatever it is that you've done to upset them. To "make no bones" means to make no apology or excuses for something, to state your position in a forthright and unhesitating manner. The origin of this is quite obscure, but likely derives from the old saying "to find no bones in something", meaning that, as you found no bones in your food, you have no problem with it whatsoever (standards were clearly lower in times past).

Other bony expressions that require less explanation include having a bone in one's leg (giving a reason for your laziness and being too bone idle to think of a good one), to make old bones (live to an old age), to have a bone of contention (a particularly sticky issue between two parties) and to work one's fingers to the bone (to work very hard), all of which makes English a rather bony language.

Do you have any favourite bone-related words or expressions?

Are there any different ones in your language?

Do please share and leave your most bone-headed comments below.
Posted by Eddie F at 08:00