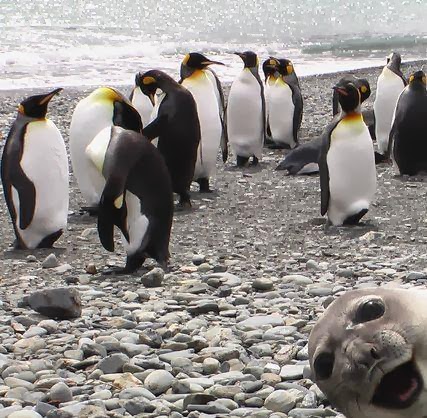 A interjection & noun. A prolonged sound expressing derision or disapproval, or an exclamation intended to startle.
Occasionally a sound (as) of cattle lowing. E19


Boo is an incredibly powerful word; indeed, I would venture to say that it's probably the most powerful word in the English language. With what other word can you loudly express vague and unspecific disapproval at someone or something (shouting "You suck!" or "Get off the stage!" can leave you open to being challenged as to why you think they suck or should cease performing)? With what other word can you startle someone so much that there's the possibility they might wet themself (even a little bit)? And with what other word can you entertain a slightly dim child for hours on end? According to the OED, you can even use boo to do a really bad impersonation of a cow - it's just that flexible.

In honour of this great word, I therefore implore all readers of Lexicolatry to boo someone today, to shout "Boo!" at someone, and to play peek-a-boo (preferably with a child - the cow impersonation is optional). To get it started, I award a sarcastic "Bravo!" and a resounding "Booo!" to the Belarusian government where public applause is illegal and where a one-armed man was arrested for clapping. Speaking exclusively to Lexicolatry, an inexplicably cockney spokesperson for the Minsk police said: "This wos not an 'armless individual. In fact, you could say he wos a 'terror wrist." He then went on to blame Jews, socialists, Western liberalism and all the other usual excuses used to justify delusional and despotic regimes. Booooooo!

Have you ever been booed?

Who was the last person that you booed?

Please leave your most startlingly derisory comments below.
Posted by Eddie F at 12:00