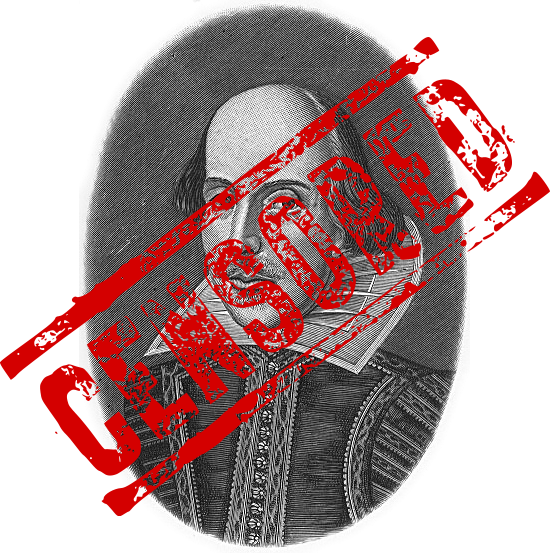 Well how times have changed! While there are now numerous publications offering Shakespeare in simplified English so that we can all understand what the [....] he's talking about, in the past publications were released with all the naughty bits taken out. Yes, that's right, porn-addled, sexting-blighted youth of today - Shakespeare has naughty bits (although in comparison to a Miley Cyrus video or your average phonecall between teenage lovers, Shakespeare's 'naughty' does seem rather Ned Flanders' 'naughty').

In the Georgian times of Thomas Bowdler, however, sensibilities were considerably more sensitive. Bowdler's father used to read him Shakespeare (good chap), but when he grew up, he realised that his pops had been slyly editing out all the racy stuff. Morally concerned that other fathers would not be capable of being similarly "circumspect or judicious", Bowdler deemed that an expurgated edition was needed, one with all sexy, profane and otherwise improper references removed. Thus, in 1807, The Family Shakespeare was published, and we have the verb bowdlerize, a rather pejorative term for such censorship.

While my first reaction to the bowdlerizing of Shakespeare's masterpieces is utter [.......] horror at such philistine interference, my thoughts have softened considerably as I've pondered on it. After all, the work of Thomas Bowdler was not the same as, say, government censorship, in which access to certain information is explicitly forbidden or restricted. Rather, Bowdler was offering an alternative, a family friendly version, one that could be read aloud without making grandma blush. Secondly, it seems that Shakespeare's raunchy nature was a genuine barrier to people reading his work. Therefore, Bowdler and his expurgations made the Bard significantly more accessible, allowing his plays to be part of family entertainment. And they were - The Family Shakespeare was a considerable success and was reprinted numerous times. As the core text of the work was not altered (apart from the rude stuff taken out), I can't help but feel that anything that gets more people reading more Shakespeare is a [.......] good thing, and that's exactly what happened.

Perhaps more telling of the social mores of the time is that fact that it was actually Thomas Bowdler's niece, Henrietta Maria Bowdler, that did the majority of the editing for The Family Shakespeare. However, she was uncredited for her work, as it was unthinkable that a delicate and sensitive woman could be reading (let alone understanding) the various sexual puns and ribald rib-ticklers that so pepper the Bard's great plays. Now how [.......] unfair is that?

What do you think of Thomas Bowdler and his worldly-wise niece Henrietta?

Do you think the bowdlerization of Shakespeare is a jolly good show or a [......] disgrace?

Do you have any thoughts on the censorship of art generally?

Please leave your most family-friendly comments below.
Posted by Eddie F at 10:00