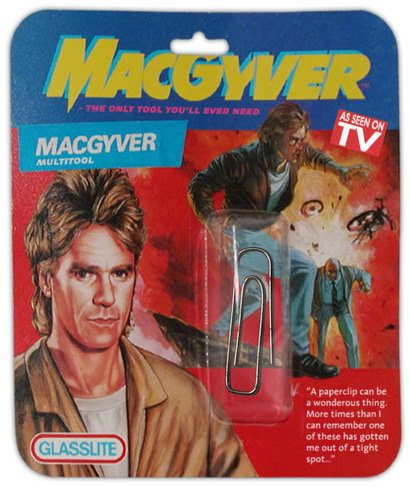 Noun. Mid-20th century.
[French. from bricoler do odd jobs, repair, formed as next.]

Construction or creation from whatever is immediately available for use;
something constructed or created in this way, an assemblage of haphazard or incongruous elements.

A person who engages in bricolage; a constructor or creator of bricolages.

Let me set the scene: you're tied up in the back of a flat-spinning helicopter; the rotors have fallen off and the pilot is dead. All you have is a paperclip in one hand, a post-it note in the other, your immaculate mullet and fifteen seconds 'til impact. How do you survive? How do you survive? A real man would easily slip this fix, of course, because a real man is a deft bricoleur, schooled in the art of bricolage. True, it might not sound like the manliest of survival crafts with its fancy French pronunciation and spelling, but some of the manliest men that have every graced our screens have been bricoleurs - BA Baracus, for one, and the Brigadier-General of Bricolage himself, Agent Angus MacGyver, a man that could simultaneously disarm a nuclear weapon, tame a tiger and spot weld your leaking radiator with nothing more than his trusty paper clip, a can of Coke (to use as a catalyst, of course) and a child's toy trumpet. Now that's a real man. Even if you're not a get-your-hands-dirty, save-the-world-with-an-envelope type of guy, you can be a bricoleur in so many fields: art, literature, music, fashion or IT, to name just a few - all you need to have is the uncanny ability to bring together incongruous elements that are immediately to hand so as construct a novel artifact that addresses whatever purpose or problem you're attempting to manage. Easy.

Are you a bricoleur, or do you have any dazzling tales of real-life bricolage?

Were you able to out-bricolage the helicopter conundrum?

Are you offended by the rampant assumption in this post that bricoleurs are men?

Do combobulate your incongruous comments below.
Posted by Eddie F at 10:00