Burnsides - Or Sideburns? Or Sideboards? 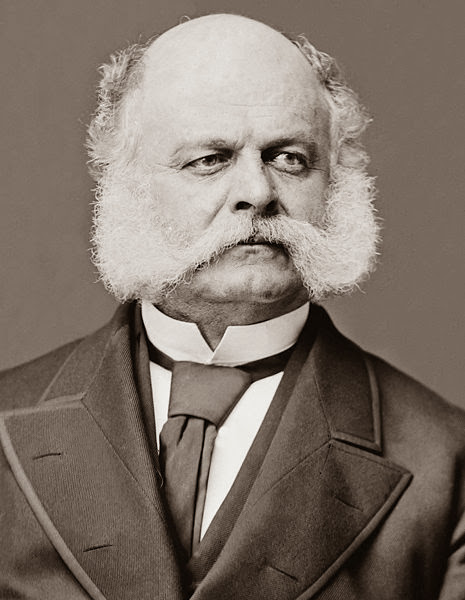 singular & (frequently) in plural. Moustache and whiskers with no beard on the chin.

You have to admire General Burnside. If you're going to follow any man into battle, you want him to be a man's man, and if Burnside's sideburns say nothing else, they say that this is what he is. Which is good because, by all accounts, he wasn't a particularly good general. He was popular, true, and he remembered everyone's name, but what comfort is that as a Confederate bullet tears through your skull? But those whiskers! If it were possible that a beard could ever engender respect and suicidal devotion, then I say that those whiskers be it.

And while we're on the subject of burnsides and sideburns, for me growing up in Oxfordshire they were always called sideboards. However, in adulthood, whenever I call them sideboards, it's greeted with derisory snorts: "Sideboards? Don't you mean sideburns, you barbally-bankbrupt buffoon?" OK - no one has ever called me a 'barbally-bankrupt buffoon', but I know they're thinking it. So let's just set the record straight here: the OED is in agreement with me:


SIDEBOARD
4 Hair grown as a whisker at the side of a man's face (sometimes continuing on to his cheek).
Usually in plural. colloquial. L19

So there. It's settled. And no, I couldn't wait until 'S' to get that one off my chest. Or chin.

Do you have burnsides, sideburns or sideboards?

Could bearded Burnside's barbal bravery bounce back on the bandwagon?

Do please leave your most razor-sharp comments below.
Posted by Eddie F at 15:00