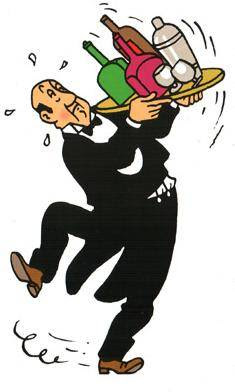 A(1) noun. A servant who has charge of a house's or other establishment's wine cellar and plate etc.;
a principal manservant. ME

A(2) noun. Historical. An officer of high rank (nominally) in charge of wine for the royal table. ME

B verb trans. and intrans. Act as a butler to; deal with as a butler. M18

Also:
butlerage noun (a) Historical a duty on imported wine payable to the king's butler; (b) the office of butler, a butler's department. L15
butleress noun (rare) a female butler. E17
butlership noun the office of butler. M16
butlery noun a utler's room or pantry; a buttery. ME

Serve out (drinks); do a butler's work.

If you've ever been tempted to look down your nose at a butler (and I'm sure you haven't), it's possibly a reflection of a cultural attitude ingrained in our language: a butler is, after all, a servant, and the very etymology of butler is from 'bottle', because that's what butlers do, isn't it? They open bottles and, although its root is actually from the butler being in charge of the household's wine, seriously, how hard a job could that be?

Well, if you have ever been tempted to be so supercilious, you should think again, as butlers (especially modern butlers) are both in a demanding job and very well compensated for their labours. Those that complete the City & Guild's Butlers Diploma, for example, can expect an entry level salary of £30,000, with the best quickly rising to salaries of £100,000 and above (one of the best paid butlers in the US is rumoured to earn around $1,500,000 per year). Perks include free accommodation, healthcare, a car and international travel. What's more, good butlers are in demand, so if you have the necessary skills and a skin thick enough to be some capricious oligarch's status symbol, you should have no problem finding (and keeping) employment. Not bad for someone that opens bottle (buttles) for a living, eh?


Are you a butler?

Do you have a butler?

Do please buttle your bottles in the comment box below.
Posted by Eddie F at 15:30