Calligraph - One Who Writes Beautifully

A(1) noun. A person who writes beautifully, a calligrapher. M19

Many years ago - in the age before emails and texts - I used to write to a girl who, although the relationship was never romantic, had the most alluring, calligraphic handwriting I have ever seen. As handwriting, I dare say it was perfect, combining everything that anyone could want - effortlessly legible, ornate without distraction, lyrically flowing and utterly individual. As I read her letters, I marvelled at how the ink would dance on the page before my eyes. Writing to her as a teenager not only prompted my life-long interest in handwriting, but influenced my handwriting. While mine would never reach the same level of artistic beauty as hers - not even close - our correspondence did prompt a desire in me to care for my handwriting, to develop it and take pride in it. I was, after all, corresponding with a calligraph.

Many years after, when I was corresponding with another girl with whom I did become romantically involved, the subject of handwriting frequently came up. On telling her that people often thought my handwriting was a woman's, she told me that "there's something very alluring about a man with nice handwriting," a compliment which, as one can tell from my use of speech marks, was one of the most memorable I've ever received. And it goes both ways, of course - she too was a calligraph.
Sadly, many commentators note that cursive handwriting (and by extension individual, beautiful, calligraphic handwriting) is under threat, if not already speeding along the road to extinction. One comment on the New York Times article Let It Die: It's Already Dying rued "Cursive, along with proper table manners, shaving once a day, and tucking your shirt in, may be relics of the past ... along with the art of conversation [and] politely paying attention to those you are with instead of some electronic device."

If individual, cursive, cared for handwriting is in decline, this is something very sad indeed. True, it's not a vital component of life - human society won't collapse without it. But it does add a little dash of graciousness, individuality and colour to an increasingly connected but homogenised world. We don't all need to be skilled in the formal art of calligraphy, and we don't all need to become calligraphs. But a little care in our handwriting, and the time spent in writing something by hand (as opposed to dashing off a text), is something within all of our reach. Together, we can defend this dying, beautiful art. 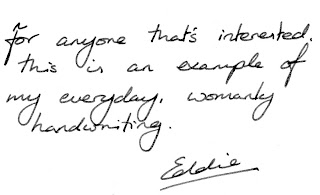 Do you practise formal calligraphy?

Do please leave your most carefully penned comments below.
Posted by Eddie F at 13:30