Cambrian - The Influence of Welsh on the English Language 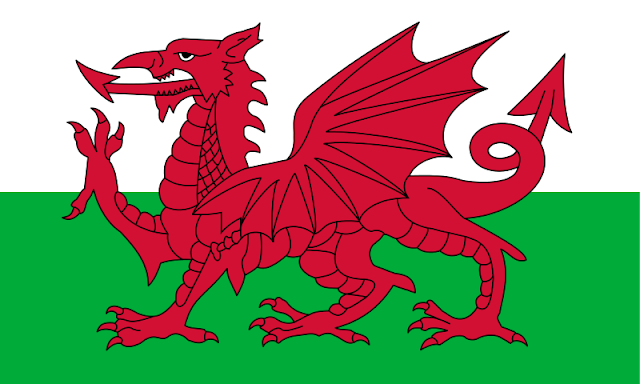 A(1) adjective. Of or pertaining to Wales, Welsh; a Welsh person. M17

A(2) GEOLOGY. Designating or pertaining to the earliest period of the Palaeozoic era,
preceding the Ordovician. M19

B noun. GEOLOGY. The Cambrian period; the system of rocks dating from this time. M19

It's hard not to feel sorry for the rather unappreciated Welsh. Not only do they have to endure being the butt of numerous jokes and slanderous aspersions about their penchant for consonants and sheep, they must suffer the utter ignominy of (particularly English) people imitating their rather lovely and melodic accent. Internationally things aren't much better, with Wales lacking the cultural punch of similarly sized countries like Scotland and Ireland. Not only is Wales the only constituent country to be unrepresented in the Union Jack, but the European Union has omitted it entirely from its maps several times - wiping it from existence, annihilating it, as if it were never there at all.

Wales is like the smallest and youngest in a big, brash, self-absorbed family - the Wilkerson's Dewey, the Simpson's Maggie, the Bluth's Maeby: talented and resilient, but habitually overlooked and drowned out in the cacophony of its rowdy family. Lexicolatry, however, stands up for the little guy. Wales might be smaller, it might be quieter, but it is no less proud and you ... yes you! ... the way you speak has been touched by Wales, the Welsh people and the Welsh language. If you're still in denial, Lexicolatry is proud to present to you a list of seven Cambrian words that you speak every day (or at least quite often) that you had no idea were Welsh. Enjoy!

Cardigan
I like cardigans; at times I've even been known to wear a cardigan. And we all know, of course, that they're named after the 7th Earl of Cardigan, leader of the disastrous Charge of the Light Brigade. Where, however, does his title and the surname come from? It's likely that its use as a surname comes from Cardigan, which is an Anglicised version of the Welsh Ceredigion, meaning 'Ceredig's land'. As for that ill-fated 7th Earl of Cardigan - sadly there's no offloading him onto the Welsh. His name was James Brudenell, he was from Buckinghamshire, and he was most definitely English. Nuts.

Corgi
Corgis may be a favourite of the Queen, and their abduction to force her abdication might even be a spy thriller plot, but corgis are most definitely Welsh. Just in case there's any ambiguity on this, the two distinct corgi breeds are called the Pembroke Welsh corgi and the Cardigan Welsh corgi. Oh, and corgi is Welsh, from cor (dwarf) and ci (dog).

Ah! Dad - my daughter's first word! How the thought of that day warms my heart and tickles my nostalgia-bone. And who would have thought, of all languages, her first word would be Welsh? Well, this one is, I grant you, a teensy bit tenuous, with the OED unwilling to definitively say that dad is of Welsh origin. However, some etymologists claim that dad did come from the Welsh tad. Or the Irish daid. Well, let's not quibble OK? It's a lovely word. And Dads are the best.

Flannel
There's not much to say about this, other than if you washed your face (or any other body part) with a flannel today, you washed it with a little piece of Wales (metaphorically speaking), as it's from gwlanen, meaning 'woollen article' in Welsh.

Flummery
Flummery, which is akin to the blandandering of a bombastic blatherskite, is from the Welsh llymru. I hope that's clear.

Well this one is less surprising, what with Wales having a long history of coal mining. Its etymology isn't completely clear, entering English through Old French, but its Celtic origins, particularly when compared to the Welsh word mwyn meaning 'ore', are convincing.

And possibly the least likely word on the list - penguin - which is probably from the Welsh pen gwyn meaning 'white head', originally applied to the now extinct Great Auk, a similarly coloured flightless bird which, to an untrained eye like mine, looks a lot like a penguin.


So there you have it - there's a little bit of Welsh in every English speaker. And just in case you're wondering, the following words are not of Welsh origin: leek (Germanic), daffodil (Latin), choir (Latin), rugby (English), consonant (Latin) and ... no ... not sheep either, which is Old English.

Are you a proud Cambrian?

Do you speak Welsh?

Do you know any other words of Welsh origin?

Do please leave your most Welsh-centric comments in the box below.
Posted by Eddie F at 15:00