Canard - Don't Be So Duckin' Gullible

2 An extra surface attached to an aircraft, hydrofoil, etc., for stability or control.
Also, an aircraft fitted with this. E20

Ducks are impossible not to like. They're beautiful, friendly, sociable, damn cute and, with a splash of plum sauce, delicious. They're also funny. In fact, the duck has been identified as the world's funniest animal by psychologist Richard "Nothing Better to Do" Wiseman. After a year of study, Wiseman reported: "If you're going to tell a joke about any animal, make it a duck." Brilliant. Keep the phone line clear for the Nobel Prize Committee, Richard.

For all its admirable qualities, however, the duck, by way of the French canard, has entered English meaning 'a hoax'. Its route of entry isn't completely clear, but several sources suggest that it's via the French expression vendre un canard à moitié, which means 'to sell half a duck'. The exact nature of the swindle (or hoax) is uncertain - perhaps it is just selling someone half a duck when they really, really needed a whole one for their duck a l'orange. If that's the case, that's a stupendously unimaginative hoaxer, and a spectacularly stupid chef. Despite this, it's the canard that gets landed with the reputation. 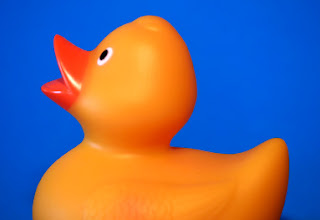 In saying this, there have been some notable duck-related canards throughout the years, including:


The Great Duck Egg Fake of 1894
A fictional conspiracy theory that millions of duck eggs were being illegally gathered from protected areas in Alaska for the purpose of harvesting albumen.


The Demon Duck of Henley-on-Thames
In 1986, a supposedly gigantic duck was reported to be attacking and killing wildlife, including small dogs, along the Thames River in Henley. Such was the panic that the local police advised that children should not play unattended near any bodies of water.


The Duckypus
In 1994, reports emerged that North Korean scientists had successfully bred a duck with a duck-billed platypus, dubbed the "duckypus" in Western media (a joke that is apparently lost in Korean). The purpose of such a breeding programme was never made clear, and while it's generally assumed to have been a hoax, no official denial was ever issued by the secretive communist state.


The Echoless Quack
A duck's quack doesn't echo. Were you ever told that? It's a canard, and so are you for believing it.


The Mock Duck Stock Schmuck
Eager to blame bankers for the Global Crash of 2008, a story circulated on the internet that it was precipitated by a Wall Street banker investing billions into the Chinese duck-meat substitute mock duck, the value of which promptly plummeted (presumably when people tasted it), thus plunging the US into recession while giving China a cash injection that has funded its growth to this day. The banker concerned was dubbed The Mock Duck Stock Schmuck, but it's all untrue, every last bit of it. Well, except the bit about bankers being to blame for the global economic crash. 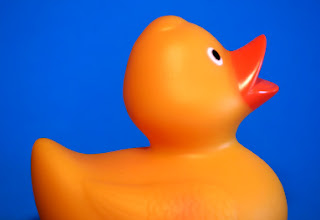 Have you ever fallen for a canard?

Do you know of any other duck-related scams or hoaxes?

Do please paddle your plummiest comments in the comment box below.
Posted by Eddie F at 17:00