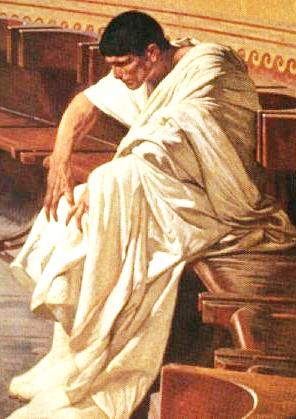 Noun. Late 16th century.
[Latin Catilina, cognomen of a Roman who conspired against the Roman republic in 63 BC.]

A conspirator, especially against government.

Historically, conspirators have it hard - usually, if someone is known as a conspirator, it's because they ultimately failed in what they were trying to do. If they hadn't, they would have been in a position to write the history themselves, and wouldn't have chosen the word conspirator, but rather freedom fighter, or friend of the people, or something similarly flattering to describe themselves.

Not that I feel a tremendous amount of sympathy for Catiline, whose intrigue and antics I rather enjoyed reading about in preparation for this post. He was from a wealthy family, had a distinguished career as a military commander, and was evidently rather suave and charismatic. He did, however, have his brother-in-law maimed, tortured and beheaded (in-laws, eh?), have his first wife murdered so that he could marry someone prettier and wealthier (allegedly), as well as being accused (and acquitted) of adultery with a Vestal Virgin. Oh, and he might have drunk the blood of a sacrificial child, although by the time that was claimed it seems that the world was getting a little tabloidesque.

He definitely did, however, attempt to overthrow the Roman Republic in what's known as the Second Catilinarian Conspiracy (the First Catilinarian Conspiracy was such a damp squib that historians doubt whether Catiline was involved in it at all, or whether or not it really happened). His plot involved murdering lots of senators and setting fire to stuff, but was uncovered by Cicero before it really kicked off (intercepted letters detailing the conspiracy - why do people write stuff like this down?). Two-thirds of Catiline's army abandoned him, and thus he was left to march around in circles until, at last, he wasn't able to avoid a fight any longer, and his small force was intercepted by three legions and wiped out. Thus, we now have a word in English that allows one to both call someone a scheming traitor and sound really pretentious about doing it. And, reading between the lines, you're suggesting that they're a particularly self-interested and ineffectual conspirator to boot. Ouch!


Have you ever conspired to overthrow the government?

Do you know any Catilines?

Do please leave any comments below.
Posted by Eddie Lexi at 11:00