Noun. Early 19th century.
[from CLEAVE verb to split, separate or sever from by dividing or splitting, come apart + -AGE.]

2 The hollow between a woman's breasts, especially as exposed by a low-cut garment. colloquial. M20

Cleavage is a fascinating word, derived from the Old English cleofan, which itself is the counterpart of the Old Saxon klioban, a cognate of ... oh who am I kidding? It's not in the least bit interesting, coming quite predictably from the verb to cleave. However, as Lexicolatry has already covered boobs, bras, buttocks and bosoms with adolescent enthusiasm, it seems appropriate that I should also peer into the dark recesses of cleavage. And, as it happens, those recesses are jolly interesting, as I'm sure you'll agree.
Note: If you've arrived hoping to learn about the wonders of geological cleavage or, even more exciting, political cleavage and discrete voter blocs, you're going to be disappointed. This post is about boobs. 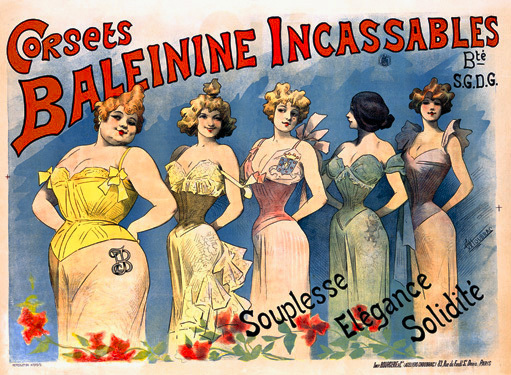 The History of Cleavage

It's fair to say that someone's attitude toward the showing of cleavage is directly influenced by one's place in history, with fashions and conventions variously rising, falling and heaving with regards a woman's bosom. If you lived during the Middle Ages in Europe, you wouldn't have been in the least bit perturbed by the sight of cleavage, either in person or art. Paintings of this period often depict young women with breasts exposed, but usually to signify fertility rather than sexuality. Even during the Elizabethan period, when long dresses and frilly collars had become the norm, cleavage was still fashionable at formal events, even on official portraits of Queen Elizabeth. In our liberal age, modern portraits of Elizabeth II have been considerably more chaste - can you imagine the ruckus if they weren't?

This acceptance of the intermammary cleft continued until the Victorian Era, when prudery prevailed and it became the norm for women to cover up all the way to the neck. Other female body parts were also added to the May Cause Scandal list, including ankles, and these attitudes proved persuasively persistent. When John Singer Sargant presented his Portrait of Madame X, with its open depiction of the upper part of the model's chest and one of the shoulder straps from her evening dress loose, it caused such scandal at its reception in Paris in 1884 that he had to leave the city permanently, though only after first trying to mollify the outraged critics by repainting in an upright strap. From a modern, Lady Gaga-era perspective, such fuss seems completely baffling.

While such Victorian attitudes persisted well into the 20th century, they slowly relaxed, particularly in the age of cinema, and various icons of culture started to display more cleavage, now associated with sexuality rather than fertility, with some such as Jayne Mansfield became famous for it. While we no longer look down on cleavage in the same way, it still has the enticement to draw considerable comment, such as when German Chancellor Angela Merkel was photographed in eveningwear that displayed ample cleavage, and when a singer like, say, Katy Perry appears anywhere or does anything.

But here's one last and curious fact about cleavage: love it or hate it, be scandalised or titillated by it, it's completely artificial, a construction of fashion and a multi-billion dollar industry that seeks to mould, shape, lift and pull women's breasts into whatever the convention of the day is. In an article for The New York Times, plastic surgeon Gerard H. Pitman dryly notes: "You can't create cleavage unless the breasts are pushed together."


Are you a fan of cleavage?

Are you scandalised, horrified or electrified by it?