1(a) A number of people gathered together so as to press upon or impede each other;
any large group of people in one place, especially an audience, a mass of spectators. M16

1(b) A group of actors representing a crowd. L19

2 singular & in plural. A large number of people or things considered collectively. E17

I don't like crowds very much. They're hot, smelly and uncomfortable. And the definition spells it out - by its dictionary definition, a crowd is something that impedes you. Who in their right mind enjoys being impeded? And another thing: being very tall, I have a tendency to get kicked in the back of the head by crowd surfers at concerts. Really, crowds suck. And now that I've written out the reasons why crowds suck, why does anyone ever have to say they don't like crowds? Crowds are rubbish. No one should like them. And if you do you're a weirdo that probably likes kicking tall people in the back of the head.

The etymology of crowd is (kind of) interesting - it comes from Old English crudan, meaning 'to press, to push'. This, however, is also related to the Dutch verb kruien, which means 'to push in a wheelbarrow'. And when you think about it, that's exactly it. If you really need to get somewhere while pushing a wheelbarrow ... and we're talking really need to get somewhere ... like it's a wheelbarrowful of the Queen's knickers or something ... the last thing you'd want to do would be to try and push through a crowd. With a wheelbarrow. That'd just be nuts. Really, crowds suck. And it's high time they were abolished. 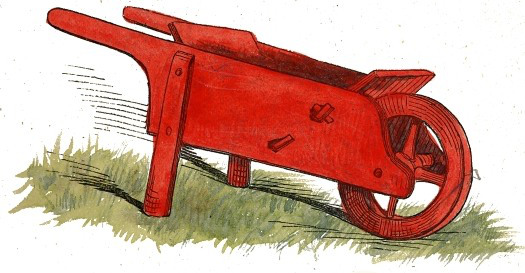 Do please leave a multitude of comments in the box below.
Posted by Eddie Lexi at 20:00