(b) (more fully hooded crow) a subspecies of Corvus corone having a grey mantle and underparts,
found in northern and eastern Europe and parts of Asia;

Also, any bird of the family Corvidae (e.g. a magpie, chough, or jay), especially a large black one. OE

A2 An iron bar with a curved, usually beaklike, end for use as a lever. Now usually crowbar. LME

A3 A grappling hook. obsolete except Historical. M16

A4 A kind of door-knocker. obsolete except Historical. L16

A5 A person who pitches sheaves to a stacker. New Zealand colloquial. L19

A6 A girl or woman, especially one who is old or ugly. Also old crow. slang. E20

Branch II
7 (Capitalised Crow.) Plural crows, same. A member of a N.American Indian people formerly occupying
a region south of the Yellowstone river, Montana, and subsequently a reservation in that State;
the Siouan language of this people. E19

B2 adj. (Capitalised Crow.) Of or pertaining to the Crows or their language. E19

1 Of a cock: utter its characteristic loud shrill cry. OE

3 Give an inarticulate joyful cry. L16

Crows. The poor things. No one likes them. The crow is the outcast of ornithologica, the anathema of avians, the veritable pariah of the perch. Virtually everything their name is attached to in our language is bad, ugly, impure and nasty. An old crow, for example, is an ugly old crone; in North American English, to eat crow is the equivalent of eating humble pie. And then there's the verb, to crow, to exultantly boast over something in the most egregious and contemptible manner. That crows should inhabit this dark space in our language is hardly surprising considering the general contempt we hold for them. To most humans, crows are variously considered ugly, pests, sinister, malevolent, dirty and (for some) downright frightening. Poor crows indeed; it really does seem that nobody likes them. Perhaps, however, we humans should change our tone a little and give the much maligned crow a little more respect; for, when one takes the time to examine them a little closer, they really are the most remarkable creatures indeed.

For one thing, crows are stupendously intelligent, certainly in the top tier of avian intellect, but easily on a par with many of the smartest primates. For example, crows are capable of using tools, such as the New Caledonian Crow which uses long twigs to reach grubs buried in tree trunks. Tool use was once considered the sole domain of humans, but it's now known that a number of species are capable of this level of superior cognition. Crows, however, take tool use a stage further, and have not only been observed using tools, but fashioning tools as well. This cognitive leap is remarkable, for it means that a crow is capable of looking at a functionally useless object, but seeing in it potential by means of some modification, thus making crows the MacGyveresque bricoleurs of the bird world.

Another aspect of a crow's intellect is its exceptional memory. A crow can, for example, recognise and remember faces. Human faces. "Oh sure," you're thinking, "big deal. I can remember faces! What's so great about that?" Well of course you can remember faces, birdbrain - you're a human. But can you look at a murder of crows and differentiate, let alone remember, the crows' faces? No? But you're not a crow, you say? And differentiating and remembering the faces of a different species is something you can't do? Fair enough. And yet the crow can perform this cross-special feat. Sorry humanity, but on this the crows have one over on us. Remember that the next time you step into your garden to shoo away the crow that's nibbling at your flower beds - it's clocked (and remembered) your face.

(Just a side note, for Lexicolatry isn't the place to be casting moral judgments on any creature's sexual behaviour, but crows are monogamous, often sticking with their mates unto death. Yup, they may be famously promiscuous eaters, but when it comes to gettin' it on corvy style, crows are at the prim end of proper.)

And finally, as if you needed any more convincing of the Hitchcockian guile of these bird-brained wonders, crows are capable of learning, adapting and improvising to an almost absurd degree, even showing a propensity for using human environments in their cunning. In Japan, crows have been observed carrying nuts that are too tough to crack to roads and dropping them so that they'll broken open by cars running over them. A brilliant idea, right? But the ever-present risk of being run over when they fly down to eat got those wily crows thinking. And observing. And planning. So, the crows started to do this by pedestrian crossings, waiting until the lights went red before flying down to enjoy their safe nutty niblets. Flippin' heck! Did you read what I just typed? The crows are using us! The crows are using us.

Without hyperbole, it is clear that our time on this Earth is running out. Soon they will rule; soon the crows will be in charge of the sky and the land (and, at a later stage, the sea). Perhaps they already are. Wind resistance is futile; the beak will inherit the Earth. All we can do is show the crows a tad more respect than we have been and prepare ourselves for submission to our winged overlords. And I, for one, will welcome them. 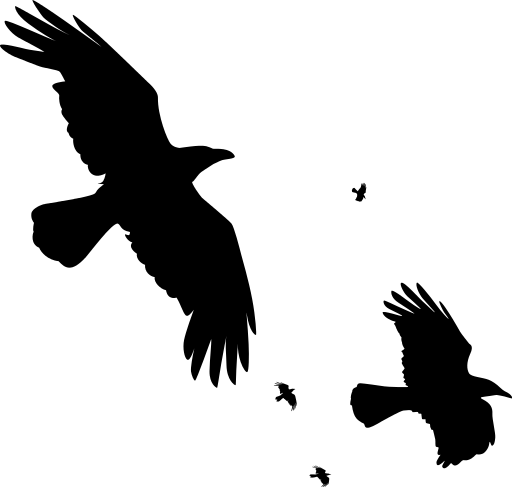 Do please leave your most crowcentic comments in the box below.
Posted by Eddie Lexi at 20:00