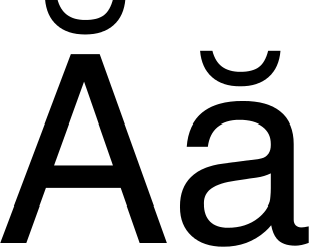 A adj. Of a mark or sign: serving to distinguish different values or sounds of the same letter,
as in ë, ê, é, è, etc. L17

We don't really use diacritics in English, but perhaps we should. An example is my five-year-old daughter, who has learnt that the letter E makes the eh sound that one finds at the start of, say, Eddie. However, she is often tripped up by the word she, which behaves perfectly well until it gets to E, at which point that familiar letter transforms itself into a strange elongated ee sound that's usually the domain of a double-E, as in sheep, keep, weep, etc.

To avoid such unnecessary confusion, other languages use a system of diacritics, which are marks above a letter that indicate which pronunciation is to be used if that letter has more than one. For example, in Romanian, you have the letter A (without a diacritic) and the letter Ă (with diacritic); the first A is pronounced ah as in map, and the second is pronounced uh as in mum. This never changes, and is incredibly useful for slow-learning foreigners like me who are clumsily trying to get to grips with the language.

However, the bizarre thing about diacritics is that English speakers often hate them! The amount of times I've heard in language classes: "Oh I can't be dealing with all those little ticks and marks and accents and things!" Guys, they're there to help us! If, when learning a language, we just take the time to learn them and what they mean, it will help us immeasurably in our pronunciation. Of course, if you really don't like diacritics, then consider Spanish, which very sensibly has five vowels with five vowel sounds, one for each, always the same. How simple is that?


Does your language have diacritics?

If you're learning a language, do you find them useful?

Do please leave your most (dia)critical comments in the box below.
Posted by Eddie Lexi at 08:00