3(a) In full, donkey engine.
A small auxiliary engine, especially on a ship. M19

Donkeys have been working with us for a very long time - at least 4,000 years, according to the Encyclopaedia Brittanica. Despite these thousands of years of faithful service, however, we don't treat donkeys that kindly, linguistically speaking. Donkey, for example, is a favourite insult for someone who is stupid, silly or inept, donkeydom is a noun for stupidity in general, and donkey-work is menial, hard and unattractive labour (but that which requires little intelligence to perform); there is also asinine, of course, a favourite of cultural snobs and naff teachers.

We do at least seem to respect their hardiness, however, as apparently being able to talk the hind legs off a donkey is quite a feat, and donkey's years is a very long time indeed (a well cared for donkey can live for 30-50 years, while the life-expectancy of the average working donkey is a much more modest 12-15 years). And, finally, it's worth pointing out that donkeys are exceptionally sure-footed, despite their association with ineptitude and clumsiness, which allows them to live and work in areas completely inaccessible to the much more respected horse.

Regarding the etymology of donkey, it's a little bit of a mystery - ass is much older, from Old English assus, itself derived from the Celtic and Welsh asyn. It's possible that donkey comes from the colour dun, a dull greyish-brown. Of particular note, however, is that donkey originally rhymed with monkey - I don't know why that tickles me, but it does, and I think it probably made you smile too. 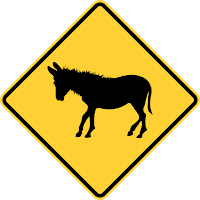 Do please get off your ass leave a comment in the box below.
Posted by Eddie Lexi at 08:00